Chaffcutter Books drifted into existence around 1996, when a manuscript which had failed to find a commercial publisher for around 20 years, was handed to sailing barge enthusiast Richard Walsh. He liked what he read – the life story of a coasting bargeman – but realised that much work was required to sort issues of chronology and flawed recollection before it could go to print.

The result was Coasting Sailorman, a quality hardback book that drew accolades from the maritime media and went on to win the coveted ‘Deadeye’ trophy for literary excellence from The Society for Sailing Barge Research.

The die was cast and further specialist interest maritime titles were added in the years that followed, a process continuing to the present day. Richard’s imprint, Chaffcutter Books, is reflected by the logo, a sailing barge’s chaffcutter wheel in silhouette.

Quality remains a watchword for Chaffcutter, many titles going on to win awards and being selected, from many thousands, for prestigious international recognition.

In almost two decades, a relatively small number of Chaffcutter titles have been carefully produced and supplemented by others from elsewhere thought worthy. The core speciality of Chaffcutter remains the sailing barge, though there is much else within our offering to excite the reader. 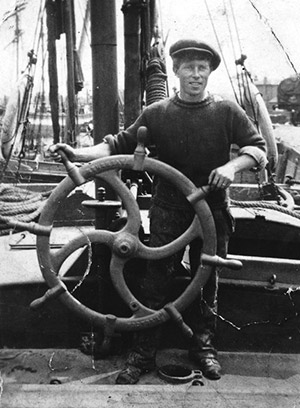 Chaffcutter books are published to be read, read again and cherished, a philosophy that could never, we believe be delivered by a tablet or other techno-gadget. Conventional publishing, with paper pages to turn and treasure will remain the media of choice for Chaffcutter’s future.

We use cookies on our website to give you the most relevant experience by remembering your preferences and repeat visits. By clicking “Accept”, you consent to the use of ALL the cookies.
Cookie settingsACCEPT
Manage consent

This website uses cookies to improve your experience while you navigate through the website. Out of these, the cookies that are categorized as necessary are stored on your browser as they are essential for the working of basic functionalities of the website. We also use third-party cookies that help us analyze and understand how you use this website. These cookies will be stored in your browser only with your consent. You also have the option to opt-out of these cookies. But opting out of some of these cookies may affect your browsing experience.
Necessary Always Enabled

Any cookies that may not be particularly necessary for the website to function and is used specifically to collect user personal data via analytics, ads, other embedded contents are termed as non-necessary cookies. It is mandatory to procure user consent prior to running these cookies on your website.